Tails of the Pack is Live, and I Have a Guest! 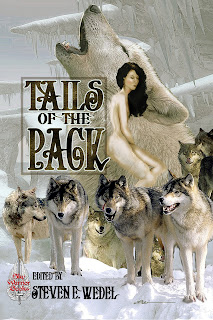 My short story "The Dark Familiar Shape of Things" is out in this new Sky Warrior Books werewolf anthology, Tails of the Pack! Look at that beautiful cover! The book is available here and here.

In honor of the release, I asked some questions of a few of my fellow anthology authors. Their interviews will appear here over the next few days.


First up is the lovely, talented, and very busy Tiffani Angus (she is currently in the middle of earning her Ph.D in creative writing, which I didn't even know you could do!). Her story ‘Bright is the Water, Dark is the Land’ is a fantastically creepy historical piece. Without further ado, here's Tiffani!


I’m a spec-fic and erotica writer, living in the UK and doing a Creative Writing PhD. So, right now, it feels as if all I do is write and read: lather, rinse, repeat! When I have free time, I like to sew and bake, but that doesn’t happen very often.

Unfortunately, because of my erratic student and teaching schedule, I’m rather bad at having a set writing routine. I’m one of those who sits and stares at a blank page, sits and stares out the window, cat-waxes for a while longer, and then goes 100mph and gets 1,000 words out in under an hour. And then my brain hurts and I can’t do it again for about 24 hours. I write on a computer and can’t write longhand (I honestly don’t know how people do that!). But I don’t have any talismans or wear the same striped socks or any of that. If I have music on, it has to be something without lyrics or with lyrics I know really well; I can sing and write at the same time, but if it’s a new song I’ll stop writing to listen and learn the song.

I tend to have a bunch of drafts sitting and waiting for rewrites at the same time, and it takes me a couple of drafts of a story before I know what it’s *about* and can make sense of it.

I started reading horror (Stephen King, Dean Koonts, Anne Rice, etc.) when I was about 10; as much as I love horror stories, though, I can’t stand horror movies! I also love Neil Gaiman, Elizabeth Hand, and Graham Joyce.

I’ve been influenced a lot by my upbringing: I grew up in a family of women, and a lot of my stories are about women and their relationships, but seen through a rather warped lens. I’m also influenced by odd little bits of things I come across in encyclopedias or at the museum or things I overhear on the Tube. My PhD novel is a historic fantasy novel, so I’m really into gardens, historic photography, Victorian art, botanical illustrations, embroidery, and the Land Girls, too.

Too many books on gardening history, for the PhD novel. Also, several books on writing (the nuts & bolts as well as the psychology of creativity), biographies of historic women, novels by the above-named authors as well as Douglas Coupland, A S Byatt, Diana Gabaldon, Robert Holdstock, Gail Carriger, books on history, and a couple dozen cookbooks.

Be observant, be curious, be diligent. Don’t let the fear get to you, and don’t let the fantasy of being ‘rich and famous one day’ take over. Writing is a skill, like playing piano or baking a pie or wiring an outlet. I believe it’s something you have to practice to get good at, not something you’re magically born with, so don’t let the myth get you down.

Honestly, being done for the day! I really like when I’ve written something and later I go back and read it and forget where the idea came from, when it feels ‘charmed’.

Well, as it happens I wrote it before the anthology happened! My first writing workshop was Viable Paradise XII in 2008. It wasn’t until I applied to VP that I realized I was a spec-fic writer (long story). At the end of the week, we were given an assignment to write a gothic story inspired by one of the pile of brochures on a table. I chose a pamphlet for tall-ship tours, and the seed for ‘Bright is the Water, Dark is the Land’ was born. There’s something intriguing about the Old World vs the New World, and the idea that people left Europe to escape things they thought were bad and crossed the ocean to find a paradise. This mixed together in my head with the images of old maps of the ocean that show sea creatures surging through the waves. It must have felt, a few hundred years ago, that humans just weren’t safe anywhere on the Earth. Plus, I like werewolves to be scary, to symbolize our darker, more animal side.

I did a bit of research on colonial America and galleons of the time. It’s rather easy to get caught up in research when writing stories that take place in the past. That’s another piece of advice for new writers: Don’t get too caught up in research, and only let about 10% of the research show on the page. The story is about the story, not about how much time you spent at the library!

After a violent storm, a village mayor in colonial Virginia is left to unravel the mystery of an injured stranger washed up on shore and the dark, silent ship that floats in the bay, while a full moon rises over his family, his people, and the waves that have brought an ancient horror to the New World.

Well, I’m in the middle of writing the novel that is part of my PhD thesis, but it won’t officially be done for another year at least. It’s a fantasy novel that takes place in an English manor house garden from 1600 through the Second World War and into the present, and I’m hoping it’ll be publishable. I’ve got a few past publications, both fantasy and erotica, but nothing else forthcoming. I’ve a few things out on submission, some stories I have to write as a requirement of my degree, and I’ve been asked to contribute to a Mummy anthology later this year, but the PhD has taken hold of my brain and doesn’t allow for a lot of outside writing, unfortunately.

Thanks Tiffani! I wish you the best in your studies and your writing. Join us tomorrow, my friends, for words of wisdom from Sarah Ennals!
Posted by littleboo54 at 5:30 PM